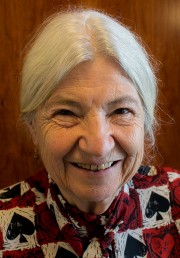 Director of CITRIS and professor of EECS department at the University of California, Berkeley

Dr. Ruzena Bajcsy (“buy chee”) was appointed Director of CITRIS and professor of EECS department at the University of California, Berkeley on November 1, 2001.   Prior to coming to Berkeley, she was Assistant Director of the Computer Information Science and Engineering Directorate (CISE) between December 1, 1998 and September 1, 2001.  As head of National Science Foundation’s CISE directorate, Dr. Bajcsy managed a $500 million annual budget.  She came to the NSF from the University of Pennsylvania where she was a professor of computer science and engineering since 1972.

In 2004 she became a CITRIS director emeritus and now she is a full time NEC Distinguished professor of EECS.

Dr. Bajcsy is a pioneering researcher in machine perception, robotics and artificial intelligence.  She is a NEC Distinguished professor in the  Electrical Engineering and Computer  Science Department at Berkeley.   She was also Director of the University of Pennsylvania’s General Robotics and Active Sensory Perception Laboratory, which she founded in 1978.

Dr. Bajcsy has done seminal research in the areas of human-centered computer control, cognitive science, robotics, computerized radiological/medical image processing and artificial vision.  She is highly regarded, not only for her significant research contributions, but also for her leadership in the creation of a world-class robotics laboratory, recognized world wide as a premiere research center.  She is a member of the National Academy of Engineering, as well as the Institute of Medicine. She is a recipient of Franklin Medal 2009 and a member of the American Philosophical Society, established by Benjamin Franklin since 2005. She is also a member of the American Academy of Arts and Sciences since 1998. She is especially known for her wide-ranging, broad outlook in the field and her cross-disciplinary talent and leadership in successfully bridging such diverse areas as robotics and artificial intelligence, engineering and cognitive science.

Dr. Bajcsy received her master’s and Ph.D. degrees in electrical engineering from Slovak Technical University in 1957 and 1967, respectively.  She received a Ph.D. in computer science in 1972 from Stanford University, and since that time has been teaching and doing research at Penn’s Department of Computer and Information Science.  She began as an assistant professor and within 13 years became chair of the department.  Prior to her work at the University of Pennsylvania, she taught during the 1950s and 1960s as an instructor and assistant professor in the Department of Mathematics and Department of Computer Science at Slovak Technical University in Bratislava.  She has served as advisor to more than 50 Ph.D. recipients.  In 2001 she received an honorary doctorate from University of Ljubljana in Slovenia and Lehigh University. In 2001 she became a recipient of the ACM A. Newell award. In 2012 she received an honorary degree from University of Pennsylvania in Philadelphia and honorary degree from Technical University in Stockholm (KTH).