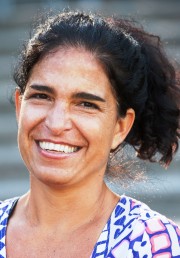 Laura Álvarez is Associate Professor of Portuguese and Director of Ph.D. Studies at the Department of Romance Studies and Classics at Stockholm University.

She leads an international research project called ‘Afro-Latin Linguistics: language contact in intercultural settings’, which gathers researchers from universities in Sweden, Brazil and Uruguay. The research group aims at increasing the current knowledge of intercultural encounters and their impact on the dynamics of language and culture by studying language change in contexts where speakers of Portuguese, Spanish and African languages have lived side by side. Individual research projects are based on different types of contemporary and historical linguistic data, including recordings from a set of Afro-Latin American communities and interviews with second language speakers of Portuguese and Spanish in Africa, as well as literary representations the speech of Africans and documents written by African slaves in colonial and post-colonial societies. So far, project participants have gathered linguistic data in Angola, Brazil, Cape Verde, Mozambique and Uruguay.

The group’s most recent research focuses on Portuguese in Africa in order to study linguistic changes as a result of ongoing language contact and shift, discussing earlier assumptions on which linguistic and extra linguistic factors lead to contact-induced change and considering the role of language attitudes as well as interaction of first and second language varieties in language change.

For that purpose, a vast amount of empirical data has been collected in Angola, where a radical shift from African languages to Portuguese has been going on for forty years. Speakers of Portuguese as both first and second language have been interviewed and recorded by three project participants from Stockholm University, and questionnaires about language use and attitudes were filled in by Angolan high school students. Similar data will be collected in Mozambique, where the process of language shift has been going on for the same period of time, but seems to have been less radical than in Angola.

Quantitative and qualitative analyses of the collected data aim to answer the following questions:

1) which are the contact-induced linguistic features that can be observed in these African varieties of Portuguese?

2) to which extent do these features relate to speaker´s attitudes, acquisition and use of Portuguese?