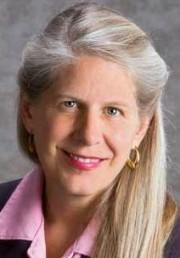 Dr. Jill Bolte Taylor is a trained and published neuroanatomist. Her research specialty was in the postmortem investigation of the human brain as it relates to schizophrenia and the severe mental illnesses. But as irony would have it, on December 10, 1996, Dr. Taylor woke up to discover that she was experiencing a rare form of stroke, an arterio-venous malformation (AVM). Two and a half weeks later, on December 27, 1996, she underwent major brain surgery at Massachusetts General Hospital (MGH) to remove a golf ball size blood clot that was placing pressure on the language centers in the left hemisphere of her brain.

It took eight years for Dr. Taylor to successfully rebuild her brain – from the inside out. In response to the swelling and trauma of the stroke, which placed pressure on her dominant left hemisphere, the functions of her right hemisphere blossomed. She has published a book about her recovery from stroke and the insights she gained into the workings of her brain.  The New York Times bestselling memoir is titled My Stroke of Insight: A Brain Scientist’s Personal Journey.

In February 2008, Dr. Taylor also gave a presentation at the prestigious TED Conference. A video of that presentation, TED Talk: My stroke of insight, was posted on the TED website which was immediately viewed by millions of people around the world. The response to the video launched Dr. Taylor into becoming a highly sought-after public speaker. She was chosen by TIME  Magazine as one of the 100 Most Influential People in the World for 2008.

Dr. Taylor now serves as the CEO of My Stroke of Insight, Inc. and as the Chairman of the Board of the not-for-profit Jill Bolte Taylor BRAINS, Inc. She feels passionate about helping others find their way back from neurological trauma, and is excited about the upcoming feature film of her life. She created Jill Bolte Taylor BRAINS, a not-for-profit organization dedicated to providing educational services and promoting programs related to the advancement of brain awareness, appreciation, exploration, education, injury prevention, neurological recovery, and the value of movement on mental and physical health, as well as other activities that support this purpose. She keynotes at conferences around the world and is having a wonderful time helping others learn more about their own brain, how it creates our perception of reality and how to distinguish between our own right and left hemisphere personalities and how we can build a healthy relationship between the two.

All photos of Jill Bolt Taylor published taken by: Kip May