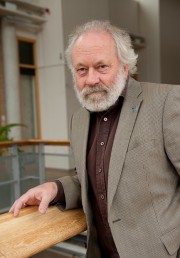 Director of the Centre for Health & Building, KTH, Royal Institute of Technology

Tore J Larsson is very consciously Scandinavian; related through his Norwegian mother to the explorer Roald Amundsen and, on the paternal side, to a line of coastal farmers on the Swedish West Coast.

He did his basic degree paper (Social Anthropology, University of Stockholm, 1972) on the production system of the Swedish industrial prison of the sixties. Tore did research at the Institute of Applied Psychology, University of Stockholm (with Gunnar Borg) from 1973 to 1976 on problems of perceived difficulty and strain, and occupational research applications of general psychophysics. Between 1976 and 1979 he did research at the Laboratories for Clinical Stress Research, Karolinska Institute, Stockholm (with Lennart Levi), in the area of stress and retirement, and in 1979 he was one of a multi-disciplinary team building the Occupational Accident Research Unit at the Royal Institute of Technology, Stockholm.

He founded the Institute for Human Safety & Accident Research (IPSO), Stockholm, together with the Swedish Labour Market Insurances in 1985. Between 1990 – 2002 he was also the Public Officer of IPSO Australia and IPSO New Zealand. In 1995 he was appointed adjunct Professor at the Victorian Institute for Occupational Safety and Health, University of Ballarat, and in 1998 he became a Professorial Fellow with the Accident Research Centre at the Monash University in Melbourne, where he was responsible for the Occupational Health & Safety Research Program funded by the Victorian Workcover Authority (1998-2001). He chaired the Scientific Committee on Accident Prevention in the International Commission on Occupational Health (ICOH) between 1996 – 2006 and was a member of the ICOH board (2002-2006), where he represented the organisation on the WHO taskforce on child labour.

Tore is the father of the National Injury Information System for severe occupational injuries in Sweden (TSI), implemented in 1988. His PhD thesis “Accident Information and Priorities for Injury Prevention” (Department of Work Science, Royal Institute of Technology, Stockholm 1990) established the paradigm for claims-based OHS information systems and he has been instrumental in developing the new EU standard for occupational injury information (2000). His expertize areas are accident and injury analysis, models and systems for injury prevention, strategic and corporate systems for OHS, occupational risk assessment, and the implementation of worksite change. He is a member of the editorial board of “Safety Science” (Elsevier); he is the Editor of ‘IPSO Factum’ since 1985, and the “Safety Science Monitor” (http://ssmon.chb.kth.se) since 1996; he has authored more than 150 published articles and numerous video manuscripts for the Swedish National Board of Occupational Health and the Joint Industrial Safety Council.